cold go out.  What you play?  Luna Sonata?

My fevered fingers stumble through Beethoven

as she keeps time against

She brushes a strand of hair from my face,

tells me about her rent increase, her grandson,

the crazy Russian psychiatrist she’s been in love with for years,

Tchaikovsky stares me down from atop her piano

and she’s next to me on the bench,

and I’m sneezing as I jam the pedals of her Steinway,

bought with a credit card booted from her now ex-husband.

That was twenty-five years ago,

after she had already crossed an ocean,

the unrelenting cold of the Ukraine,

and her beloved father to die alone.

Soon I’m in her chair, and she’s playing

in a white scarf and hat, her wilted platinum curls

masking the soiled rim of her beret,

the limbs of a Nutcracker,

her eyes watery and milky, like an ancient oyster

and its endless surging waves,

only to find itself belly up on a three-pronged fork.

When the lesson ends

she kisses me. Her drugstore lipstick

“Diaspora in F Major” was previously published in the “Pittsburgh City Paper”, USA in 2010. 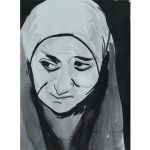 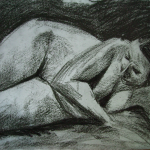 Next Story:
My Mother as Walden Pond