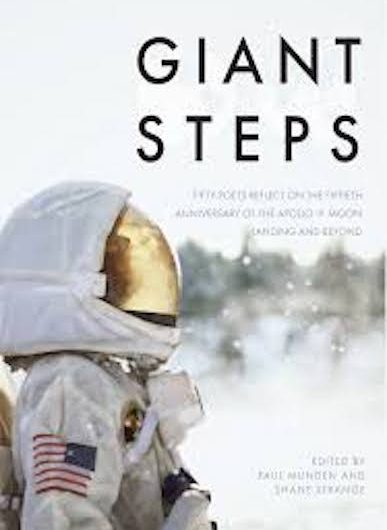 Giant Steps is a modern compilation of the workings from fifty poets where they reflect on the Apollo 11 Moon Landing “and beyond”.

An interesting concept – Space and poetry. In a way, polar opposites. In another, the two compliment each other in a revolutionary way. There’s something about the silence and slow nature of Space that spells out in poetry so easily. As shown in this collection, the poets shed light onto concepts and ideas about the era in such a way I’ve never seen done before. What is really intriguing about this collection is the conscious decision to include a twin piece from each contributor on facing pages. What comes as a result is a comment on general observation and childhood recounts, paired with a wider glance at the science and culture that came with the development of the space race after Apollo 11.

Ideas such as the child-like innocence of space travel versus the very real impact it has on society all these years since Apollo 11, is a very common theme seen throughout these incredibly crafted, and clever pieces. As a reader, I fell into the world that the poets would paint when describing the era of the late 60’s. There were many authors who played on the notion of contrast between what they would’ve observed and what they now know to be true about Space, Science and Politics. I found it quite fascinating reading about the man in the “bubble suit” (Oliver Comins) looking over at the “blue globe” (Anne Casey) as “a spear [is] thrown at the moon” (Paul Mills). Readers will be transported to a time where the young generation of the late 1960’s innocently watch incredible science happen before their eyes on the small black and white television.

Other poets went down the more politically questionable path where individual recounts meet an open interpretation to the innocence of the space race. The use of language in the opposing twin poems play with the reader’s sense of time and feeling of content. The poets have a talent in tearing down the walls of of the obscured perception we have on the event from five decades ago. Poets such as Helen Mort, Ross Donlon, Anna Calwell and Oz Hardwick portray the many over looked levels of the intricacy and complexities of the time. Reading through the pieces I felt as if I was on a rollercoaster of time jumps. Beginning my journey with the child-like perception of the major moment in history, I would be immediately taken to a present day; a conception of the fallen sense of community and passion for science where we as a society seem to have taken advantage of the planet we live and breathe on. These accompanying poets would retain my eyes to the page where the tones of the adjacent pieces would seamlessly continue and complete the sensation that I was following on an individual’s journey.

Something that stood out for me, and a thought that I took away after reading this collection is that we as a society fail to take advantage of, is the overbearing speed of time passing. It has been fifty years since the moon landing and some people are remembering it like yesterday, which reads so clearly in their writing. We have all started our journey on Earth as innocent as each other; we’ve grown up to learn the complexities of what life is. Poets such as Dominique Hecq, D.W Fenza and Oliver Comins leave us questioning how much time has really passed us; how different the world is becoming; and the technological advances that science and space discovery now find itself absorbing. In a way, we also question the childhood innocence of seeing something as magical instead of a scientific as something we have now lost.

This collection and the words within are carefully and cleverly put together by some amazing writers of the globe. They all have a story to tell and a different way of telling it. 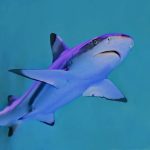 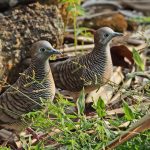 Next Story:
At the Heart of Every Stone, A Bird