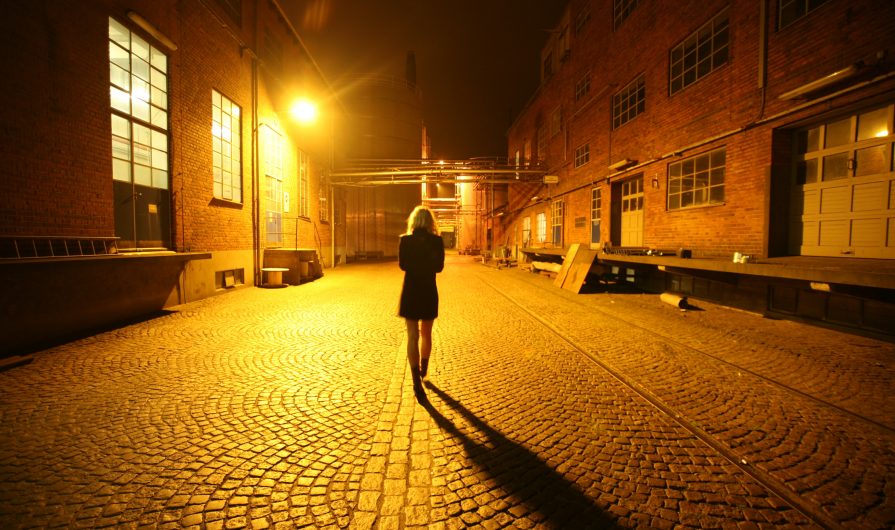 The streetlamp is a thing of beauty. Tall and slender, its neck bows over the footpath in an elegant curlicue. Shards of glass glitter like diamonds in its sepia glow.

Kristallnacht, they’re calling it. A pretty name for such an ugly night.

Early this morning, Anna stole from her cold, hard bed and watched the tailor dart out of his shop and nail wooden boards across the window’s smashed mouth. His wife peered around the edge of the door, proffering a broom. The tailor snatched it and waved her back inside. Now someone has daubed ‘Achtung Juden’ across the crooked boards, and a death’s head stares at Anna with its sightless eyes. She shudders.

The night hangs still and expectant. Anna hears the familiar ring of steel-capped toes echoing on the street. Max strides into view, swinging his black leather briefcase in the iron grip of his black leather gloves. He’s not a tall man, but there’s something ox-like about the short, thick neck and powerful shoulders lodged in the grey worsted overcoat. Anna draws back from the window as the moons of his steel-framed spectacles wink in the lamplight.

The key rattles in the lock, the door scrapes open and slams shut again. By the time the heavy bold clangs into place, Anna has resumed her usual station in the faded armchair, the sewing basket in her lap. She steadies her hand to feed the thread through the cold unblinking eye of the needle. Max’s collar, stiff and white, needs mending. She must do it very carefully.

Max stands in the doorway, surveying his realm. Anna bends her head over her needlework; the stitches are neat, tiny – invisible, almost. She has swept the floor, dusted every crevice of the heavy furniture. Nothing is out of place. She holds her breath. Max’s briefcase lands with a dull thud on the floor. He swivels round and heads off to the bedroom where he will hang his overcoat in the wardrobe. Anna shivers in the November chill. She would like to light the fire but Max will not allow it; he does not feel the cold. She is grateful for the soft glow of the lamplight through the window.

The rhythmic rap of steel caps along the hallway heralds Max’s return. He sits in the other armchair and snaps the metal bands around his shirtsleeves.

‘Yes, Max.’ Anna places her sewing basket on the floor and leaves the room.

When she comes back, Max is adjusting the position of the cigar box on the walnut table by the window. He returns to his armchair, glaring, as he waits for her to put his coffee cup on the side table. The cup is a little full; she must not spill it.

She creeps to her chair and picks up her sewing.

Max cracks his knuckles. ‘The enemy within.’

‘That’s what the Führer calls the Jews. He sees them as a pernicious influence, a threat to German civilisation.’

Anna guides the needle through the shirt collar. The thread is as taut as wire.

‘It’s understandable the German people should resent the race. They have grown wealthy at their expense.’

Anna bites her lip. She puts down her sewing and moves to the window. She can feel Max’s eyes trained on her.

‘Not that I have anything against Jews personally, my dear,’ he says, in his precise, measured tones. ‘After all, I married you, didn’t I?’

She looks onto the deserted street, observes the looming bulk of the apartments opposite, the shadowed depths of silent archways, the glitter of glass on the footpath, the pale golden oasis of the lamplight. And a sudden flare of light from its blurred edges.

‘I thought I saw someone outside.’

‘Someone outside?’ His voice is sceptical.

‘Yes. A man in black. Under the streetlamp. He was there last night too.’ A black shape hovers on the edge of darkness, then fades. A thin tendril of smoke lingers in the air.

Max strolls to the window. ‘There’s no one there, Anna. You’re imagining it.’

Max is right behind her now. She can feel his hot breath on her neck. ‘I said,’ he hisses, ‘there is nobody there.’ He strides back to his armchair. ‘Another figment of your imagination. We shall have to keep an eye on your hallucinations. I suppose you must feel very—’ he selects the word and savours it, ‘disturbed to hear how much people hate the Jews. Though technically you’re not Jewish, are you, Anna? Sit down.”

He smiles. ‘It was only your father who was Jewish. Isn’t that so, Anna?’

‘My mother was a Christian; you know that.’

‘And she married a Jew. Whatever was she thinking?’ He laughs. ‘Whatever was I thinking!’

Anna turns her attention to a frayed cuff.

‘Frau Brenner told me she saw you on the street this afternoon.’

‘Why would you imagine she was spying on you? She was merely making small talk, as neighbours do. So, you went out to get some bread.’ Max takes a penknife from his pocket and pulls out the blade. ‘No other reason?’

‘Frau Brenner said you were in the company of a young man. You were laughing and smiling with him. Is he your lover?’

‘Of course not! I’ve never seen him before in my life!’ She jabs the needle into her thumb. A pinprick of blood drops onto the white cuff. ‘I dropped some change from my purse. He helped me pick it up. That is all. I didn’t think—’

‘No, you didn’t think. I shall have to keep my eye on you. Get my spies to follow you.’

He laughs mirthlessly. ‘Can’t you see I’m only teasing you! No: you haven’t been yourself recently. So nervy, so forgetful.’

Anna’s hand flutters towards the neck of her blouse and Max pounces.

‘In my jewellery box – on the dressing table.’

Max tests the point of the penknife with the meat of his thumb. The blade flashes silver in the lamplight. ‘That’s all right then. I thought for a moment you’d lost it. I wouldn’t like you to lose it. It belonged to my mother.’

‘I took it off when I went to the baker’s. The catch is loose and I was afraid it might fall off.’

‘Why didn’t you tell me the catch was loose?’

‘Fetch the brooch, Anna. I’ll see if I can mend it for you.’ She hears him snap another blade from the penknife. Her heart hammers like pounding jackboots. ‘Oh, Anna, you have lost it, haven’t you?’

She gulps. ‘I put it in my jewellery box this afternoon, I swear.’

‘It is very valuable, Anna.’

‘I know. I went to put it on tonight, after you came home, but it wasn’t there any more.’

Max sweeps from his chair, fists tightly balled. The cup and saucer fly off the side table. ‘And when were you going to confess to me, Anna?’

‘I was going to have another good look first. I didn’t want you to think—’

‘Think what, Anna?’ He’s towering over her now, his snarling face a mere breath away.

‘Think I was losing my mind.’

His face relaxes into a parody of a smile. ‘If you were losing your mind, they’d come to take you away, wouldn’t they?’ He sits. ‘Why don’t you look in the cigar box? That’s where you mislaid it last time.’ She hesitates. ‘Go and look, Anna.’

She edges towards the walnut table near the window and fumbles with the latch on the cigar box. The brooch gleams gold in the lamplight.

‘But I know I didn’t put it there!’ She cannot face him.

A dark shape looms out of the shadows. Anna gasps.

‘Don’t tell me: you can see the man in black! You know there’s no one there, don’t you? It’s all in your head.’

‘But Max, he’s standing there, under the lamplight, smoking.’

‘That doesn’t sound so very threatening. So: what does he look like?’

‘His hat is pulled down low over his eyes.’

‘Lurking in the shadows like that. You think he’s coming to take you away?’ Max barks a laugh. ‘I can understand your anxiety. They’ve been rounding up Jews, you know. Even half-breeds like yourself.’

‘I know.’ Anna braces herself against the wall as she turns towards Max. ‘The Steinbergs. No one’s seen them in days.’

Max springs to his feet. His eyes hide behind the mad reflection of the lamplight in his spectacles; his lips stretch into an ugly leer.

‘Imagine it. It’s the middle of the night. You wake to the ring of heavy boots echoing in the stairwell. Closer and closer they come. You hold your breath. Perhaps the angel of death is coming for someone else. But no – they’re hammering at the door. The harsh, guttural bellowing of angry men. The smash of glass, then crash – the door’s down. They grab you roughly and push you down the stairs, hurling filthy insults. Goodbye, Steinbergs. Goodbye and good riddance.’

His thick neck threatens to burst from his collar and an angry vein throbs in his forehead. Spittle flecks his chin. ‘Sit down, Anna!’

‘You are so suggestible, Anna! You know there’s no one there, don’t you?’

‘But—’ She observes the way his mouth begins to twist. ‘If you say so, Max.’

‘I do say so, Anna. We can’t have you imagining things, can we?’

Silence falls, as fragile as glass. She takes a deep breath and picks up her needlework. The pinprick of blood on the shirt cuff has smeared into a brown stain.

A thunderous knocking smashes the silence. Anna turns terrified eyes towards the door. Her hands, gripping the sewing, freeze in mid-air.

Max smiles, pares his thumbnail with the knife. ‘Open the door, Anna.’

Another thunderous knock. She thinks the door will splinter.

Max peers at her over the top of his spectacles. ‘You think the man in black is coming for you? You think he knows you’re a Jew?’ He examines the blade of his knife. ‘Open the door.’

Anna looks towards the door, looks at Max, and makes her choice.

The heavy bolt clangs, the key rattles in the lock, the door scrapes open.

Max sweeps to the door. ‘You really are losing your mind.’ Anna scuttles to the window and waits.

Then Max staggers back. His white face wears a puzzled expression. ‘How strange.’ The words are slurred. ‘There was something – someone.’ He sketches a vague shape in the air with his left hand. ‘I’m so cold, so very cold.’ His glazed eyes stare at the hand. He doubles up and hits the floor, thin lips wrenched into a rictus of agony. ‘Anna! Anna!’

She watches him flail for a moment, then turns her back and gazes through the window.

She can see him clearly now, in the lamplight. The man in black doffs his hat and bows. He retreats into the shadows.

Anna’s face lights up in a smile. She draws the curtains. 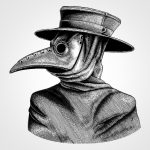 Previous Story:
The Rats of The Rocks, Sydney 1900 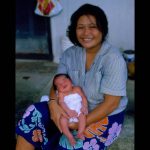 Next Story:
Six Mothers I Had