My grandmother on my mum’s side, Charlotte Nona (Nona is a Sinhalese word for ‘madam’ or ‘lady’), had street cred—her reputation preceded her wherever she went in the district of Colombo 2, also known as Slave Island. She used this influence to take down the world’s first female Prime Minister.

She grew up under the thumb of her overbearing older brother, William. He was a man with patriarchal values, who believed tradition and culture were inextricably linked. In other words, he believed a woman should not be seen or heard by men other than family; a woman’s marriageability relied entirely on her virginity. Whenever they left the house to go to temple or visit relatives, both sisters were always escorted in a covered rickshaw so as not to inflame the passions of men who happened by. William dealt with any unsavoury interaction with the opposite sex with violence and imprisonment of both women. So, affection and empathy weren’t her strong suits. Charlotte and her sister weren’t allowed to go to school, although they may have received a cursory education from a home tutor, or Charlotte learnt by observing their brother as he ran the family stall at the fish market. Either way, she developed a mean business acumen.

She went on to marry a man called Anderson Samaraweera from Galle and gave birth to six children—five daughters and one son, but he didn’t make it past infancy. As a culturally traditional family, their son’s death was a blow. Charlotte Nona was motivated to make the cash by herself. You might assume that Anderson should have been responsible for bringing in the moolah. Alas, he didn’t have any business sense. He was content working at a five-star hotel, and occasionally bringing home white tourists so they could see how the locals lived. His love of drink and having a punt at the betting shop on his way home may have been the indicator to Charlotte that Anderson was no businessman.

Charlotte Nona started with one auto-taxi, otherwise known as a three-wheeler or auto for short, and from that she earned her way into acquiring a small fleet of them. Her daughter Gunawathie, nicknamed Mallika, organised the books. She did fleece her mum for a few rupees to spend at the tuck-shop, but on the whole, she helped her mum run the business because she was good at maths. Eventually, Charlotte Nona’s empire grew to include properties—plural.  She built this empire for her daughters so they would have attractive dowries that would help wrangle some rich husbands. The husband game became Charlotte Nona’s failsafe way to protect her budding daughters from falling in love with undesirables.

But you guessed it, they did anyway.

Mallika fell for a boy whom she met while training to be a midwife. He worked the mortuary carting dead bodies from wards. Mallika would skip school to spend time with him, having learnt from her sister what not to do when meeting in secret with boys. She became adamant that he was the man she wanted to marry. Despite Charlotte Nona’s dismay at her daughter choosing a life where she would have to do most of the work to make the money, Charlotte Nona agreed in the end and paid for their wedding. Charlotte Nona’s grand plan for her daughters didn’t see them having to work as hard as she did. One daughter out of five was able to snag Charlotte’s dream though. Anderson would have counted that as bad odds, but he never concerned himself with women’s business.

Mallika’s older sister, Manel, wasn’t so lucky. But before we get into why, let me tell you about the neighbourhood where Charlotte Nona and her family lived.

They lived at number nine Leechman Lane, Slave Island. Slave Island was a place of poverty; low-income housing and slums inhabited predominantly by Tamils. Post-Independence, they were becoming the Sinhalese people’s punching bag with the passing of bills to put citizenship of many Tamils, who had lived and worked in Sri Lanka for generations, into question. These slums, however, were overshadowed by beautiful colonial-style houses and council buildings that sported either British or Portuguese architecture.

Charlotte Nona was in a position to lend her Tamil neighbours money, collected with interest, and even let them live in her properties with reduced rent. Her reputation arose from these noble actions, and similarly to how she ran her family, Charlotte Nona was respected out of fear. When she went for a stroll through the market, vendors she had helped to set-up their businesses would fall over themselves to offer her the best of their produce.

Charlotte Nona’s family lived amongst the people whom she helped. This made Manel’s transgression hurt her more. Manel became infatuated with a Tamil boy. They ran away together and eloped. Charlotte Nona was furious. She took her frustration at Manel’s lack of gratitude and respect out on the younger daughters, including Mallika.

Charlotte Nona took them out of school and kept them at home for months. Mallika and her younger sister were punished for the mistakes of Manel. But Mallika agreed with her mother’s wish to cut her sister out of the family. She blamed her for missing school and being with friends. But when Manel gave birth to Charlotte Nona’s first grandchild, a boy, this spurred Charlotte to reunite with her estranged daughter. Manel and her family were allowed to move back into the family home. Manel and her children lived with Charlotte Nona from then on, taking care of the house and Charlotte Nona herself when she grew too old.

But then how does the Prime Minister of Sri Lanka—the first female Prime Minister in the world—cross paths with Charlotte Nona? Sirimavo and Charlotte Nona could have been bosom buddies in another life because they shared the drive and motivation to better the lives of the people around them—Charlotte’s circle, of course, was a bit smaller.

Post-independence Sri Lanka embarked on a mission to reinstate national pride and set up a self-sustaining economy with what remained when the British left. Sirimavo Bandaranaike practically inherited the leadership of the Freedom Party when her husband was assassinated in 1959. Sirimavo had been heavily involved in her husband’s political career, and he had come to respect her judgment. His colleagues held her in the same esteem.

The Freedom Party won a landslide victory in 1960. Bandaranaike resumed the work her husband had started by attempting to nationalise Sri Lanka and increase Sinhalese fervour by instating Sinhala as the official language and acknowledging Buddhism as the dominant religion, thus alienating Tamils even further, but I digress.

Bandaranaike was a source of inspiration for Charlotte Nona—she was the example to follow, powerful without a husband. She had no beef with the Prime Minister during her first term. It was during her second term, however, when Bandaranaike introduced the Land Reform Act of 1972, reducing the number of properties a family could possess, that turned Charlotte Nona against her. She had accumulated more than what would be the allowed number of properties; it was a simple decision to change her allegiance and become a supporter of the opposition, the United National Party.

Charlotte Nona used her wealth in the form of donations, and the influence she had on the population of Slave Island, to help the local UNP politician win his seat. If the Freedom Party was to win again, Charlotte Nona’s properties that housed Tamil families would have been forfeit with no compensation, and those families forced out into worse poverty. To be fair, Bandaranaike’s approval rating was already abysmal due to her economic policies. The election in 1977 was a landslide victory for the UNP with 140 out of 168 seats won. But, without Charlotte Nona’s support, her Tamil neighbours surely would have voted for the Tamil United Liberation Front, and the key seat of Central Colombo would have been lost. At least that’s how Charlotte Nona’s golden child, my mother, says it happened. 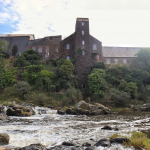