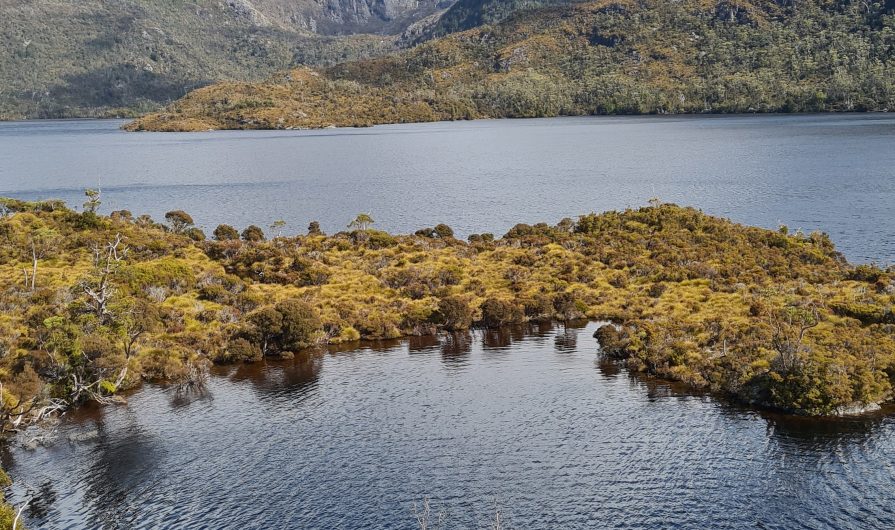 This land has had many names, some known and others lost. Europeans first called it Van Diemen’s Land and later Tasmania. In palawa kani, the language of the Tasmanian Aboriginal people that has been meticulously reconstructed from the wreckage of colonial impact, it is known as lutruwita.

The first European to discover lutruwita was Dutch explorer Abel Tasman, who named it Van Diemen’s Land in 1642. Observing notches cut into trees at five-foot intervals, Tasman surmised that this newfound land was inhabited by giants. English sailor Tobias Furneaux was the next European to chart part of the island after his ship Adventure became separated from James Cook’s Resolution in 1773. Finding safe anchorage at the place he named Adventure Bay after his ship, Furneaux spent five days there and observed signs of habitation. Cook’s Resolution and Discovery visited Adventure Bay in 1777, as did William Bligh’s Bounty in 1788. Unlike Furneaux, Cook briefly met with members of the Nuenonne tribe who called this place home.

Bruny D’Entrecasteaux was a French explorer who set out in the frigates Recherche and Espérance in 1791 at the behest of King Louis XVI. He was in search of another Frenchman, La Pérouse, missing since 1788. La Pérouse had surprised the First Fleet when his frigates sailed into Botany Bay on January 26th 1788, just eight days after the arrival of the British. By the 26th, the British had decamped to the more-promising Port Jackson, where Arthur Philip proclaimed sovereignty for Great Britain over the entire eastern seaboard of New Holland. The French remained at Botany Bay for six weeks before sailing for New Caledonia and the Solomon Islands. Despite his intention to return to France by December 1788, neither La Pérouse nor his crew were seen by Europeans again.

When D’Entrecasteaux’s expedition made landfall in Van Diemen’s Land on April 23rd 1792, they did so not at Adventure Bay but forty kilometres to the west, on account of navigational error. However, the place they were anchored, named Recherche Bay by D’Entrecasteaux, proved an excellent harbour. The explorers spent five weeks at Recherche Bay, naming the distant snow-capped mountain to the west Mt La Pérouse, but did not encounter the local tribe, the Lyluequonny. The expedition charted the hitherto-undiscovered channel that proved Adventure Bay was on an island. Today these places are known as the D’Entrecasteaux Channel and Bruny Island. Leaving Van Diemen’s Land, the expedition continued its search in New Caledonia and the Solomon Islands. Unbeknownst to D’Entrecasteaux, Pitt Island was where survivors of La Pérouse’s expedition had washed up after his ships had struck reefs; the result of a cyclone.

D’Entrecasteaux’s expedition visited New Guinea, Manus Island and the Dutch colony of Amboina. From there they sailed south via Timor toward the coast of what would become Western Australia. Strong winds prevented the vessels from charting a course for Dirk Hartog Island in Shark Bay, and a deer that D’Entrecasteaux had intended on setting loose on the mainland was swept overboard. Land was finally sighted on December 5th just north of Cape Leeuwin. Though the coastline was unpromising to French eyes, signs of Aboriginal habitation were evident. By this time, almost two months had passed since leaving Amboina and the lack of fresh provisions were starting to take their toll. The ever-present threats of scurvy and the need to find fresh water loomed large. It was at this point that the Espérance’s captain, Huon de Kermadec, begged D’Entrecasteaux to abandon the southern coastline and return to Recherche Bay.

On January 21st 1793, when the expedition reached Recherche Bay for the second time, , half a world away Louis XVI was executed by guillotine as the French Revolution reached its crescendo. At Recherche Bay, signs of habitation were evident: a hut had been built near the harbour and a tin plaque the French had erected was missing. It was only on February 7th, less than a week before the expedition left, that the French and Lyluequonny finally met. The botanists Labillardière and Delahaye were collecting specimens when they heard voices. Suddenly they were confronted by a large number of hunters, but the all-too-common violence that often marked such encounters was avoided when the Lyluequonny put down their spears and the Frenchmen their guns. The Lyluequonny party comprised forty-two people, more than half of whom were children. Naked, aside from the wallaby skins they wore draped over their shoulders, the Lyluequonny accepted gifts of neckcloths and handkerchiefs and in return they offered shell necklaces. Labillardière even encouraged the hunters to demonstrate their prowess in spear-throwing.

The next day a party headed by Labillardière met a group of nineteen Lyluequonny eating shellfish beside a fire. Artist Jean Piron recreated this scene in his ‘Aborigines of Van Diemen’s Land preparing a meal.’ ‘The setting includes three hearths with crayfish broiling and in the foreground are depicted fine examples of basketry and seaweed water containers’ (Mulvaney, p. 66). Labillardière is pictured on the left wearing a brimmed beaver hat, in friendly discourse with a Lyluequonny tribesman. Desperate to understand the Lyluequonny, ‘[t]he French made strenuous efforts to establish a word list. Labillardière’s vocabulary included 83 words’ (Mulvaney, p. 72). At a third meeting on February 10th, the French observed Lyluequonny women diving for crayfish and abalone, which they prepared along with seaweed on the fire. The French noted that the men did not enter the water, and nor did the Lyluequonny appear to eat scale fish.  On February 12th one Lyluequonny man, Mara, boarded the Recherche at the encouragement of the French, where D’Entrecasteaux gave him a rooster.

Departing Van Diemen’s Land, the expedition sailed for New Zealand, then Tonga, New Caledonia and the Solomon Islands. Once more they sailed close to Vanikoro, where the La Pérouse expedition had foundered. de Kermadec perished on May 6th and D’Entrecasteaux from scurvy on July 19th. Worse was to come in Indonesia, where the expedition learned that as France and Holland were now at war, the sailors were to be imprisoned. By the time Labillardière finally made it back to France, he had been away four and a half years.

It is February 12th 2021 and I am at Recherche Bay 228 years to the day after Mara was given his rooster and the D’Entrecasteaux expedition made its final preparations for leaving this place forever. I’m lucky to be here at all, having dodged the latest Covid-19 scare by rebooking my direct flight from Perth to Hobart for the 10th, just two days after the Tasmanian Government deemed it safe for WA residents to enter. I am here because I am powerfully drawn to lutruwita and its vast multitude of wild and beautiful places. I am here because something is calling me to edge of things and I want to see South-East Cape, the most southerly point on continental Australia.

On the morning of the 12th, I set off on my walk before dawn as will become my habit during this two-week stay in lutruwita. I stand at the Whale Lookout in the pre-dawn light and then, on my fifteen-kilometre round trip to South Cape Bay, I walk the ancient paths of the Lyluequonny. The most famous Tasmanian Aboriginal of all, Truganini, was born here in 1812. Her husband Wooredy was old enough to have been present at the French landing in 1793. George Augustus Robinson walked this same path in 1830 as part of his Friendly Mission to conciliate the native population. Guided each step of the way by the Nuennone, who were intimately familiar with this land and these waters, Robinson trekked across Van Diemen’s Land, conciliating as he went. As they began their trek along the punishing South Coast Track, the party came to the realisation that an apocalypse had occurred here. Thirty-seven years after the coming of the D’Entrecasteaux expedition, the Lyluequonny and many tribes like them had all but been obliterated.

As I walk the paths and duckboards through forest and marshland, the sun rises behind me while storm clouds loom ahead. When I reach the cliffs overlooking South Cape Bay, I am presented with a scene of such majesty and wild beauty that words cannot hope to convey. Descending the steps to the beach, I am buffeted by winds and soaked by rain and spray. Eventually I find a place just beyond this most southerly of Australian beaches to rest and reflect. It is there I realise that, just like D’Entrecasteaux, we’re all searching for La Pérouse. Each of us has a La Pérouse containing our most intimate desires—love, money, some other form of personal happiness—but while we restlessly pursue our quest we fail to find that which is right before our eyes.

In lutruwita, the weight of history can be overwhelming, its gravity drawing you in as though into the orbit of an enormous planet. For the most part it is a dark and shameful history. Forget the so-called convict stain—impoverished people from across the British Isles were transported here for crimes that would barely be worthy of a slap on the wrist today. The real stain lies in the fact that the Tasmanian Aboriginals—their homelands invaded, their families hunted, incarcerated and murdered—were driven to the brink of extinction although not, as it transpired, beyond that precipice. On February 15th, the Tasmanian Museum and Art Gallery made its long overdue ‘Apology to Tasmanian Aboriginal People’ for the crimes and injustices that were done in the names of science and museum curation from the birth of the Royal Society of Tasmania in 1843. Most infamously, Truganini, the so-called last Tasmanian Aboriginal, was disrespected in death as in life. Instead of her remains being cremated and scattered in the D’Entrecasteaux channel as per her wishes, her bones were instead displayed for decades in the museum alongside that other notoriously dead Tasmanian species, the thylacine. In a speech delivered by Brett Torossi, Chair of the Board of Trustees, he said:

Today we find the courage to take responsibility for the past. Today we own our actions and culture that have caused such pain to Aboriginal Tasmanians. This is a moment long overdue. Today is therefore a day of enormous importance and gravity. Today we, the Tasmanian Museum and Art Gallery, apologise to Tasmanian Aboriginal people for nearly 200 years of practices that we acknowledge were morally wrong (Tasmanian Museum and Art Gallery, 2021).

In lutruwita the repressed doesn’t merely return, it gallops. The crimes of the past can neither be forgiven nor forgotten and yet what has often seemed like glacial progress toward reconciliation is slowly gathering pace. At Freycinet National Park in my final days in lutruwita, I meet Aboriginal Discovery Ranger Jye Crossley. Jye has worked in this capacity at national parks and schools for years but this is his first weekend working at Freycinet. The afternoon session sees participants making a traditional bull-kelp water carrier adorned with shells from Great Oyster Bay, the beach on which we sit beneath the volcanic Hazards. Jye is from Marrawah on the far north-west coast and a master craftsman of these water carriers. By the time I’ve finished my work to Jye’s satisfaction I’ve learned something of Tasmanian Aboriginal culture in a tactile manner.

This is the lesson Europeans like myself must learn in lutruwita and across Australia: not to talk, but to listen. Not to lead, but to follow. Not to take, but to give back. Only then will we find our healing. 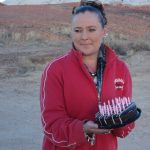 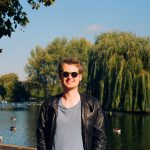