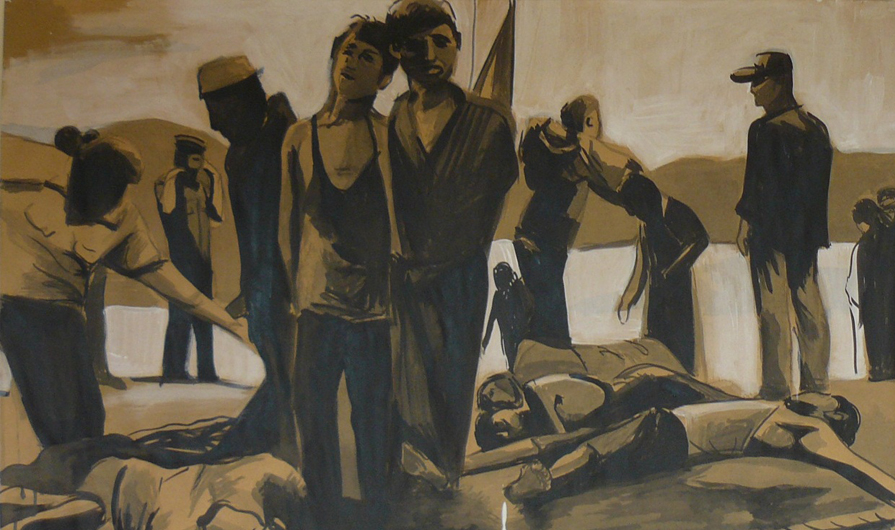 I wake coated in cold sweat, my throat dry and raw. For a moment I don’t remember where I am. Then reality flashes through me. My heart feels squeezed, as though by octopus tentacles.

It’s today! I remember with dread.

I can’t believe I managed to sleep at all, but some time in the early hours I dropped off from pure mental exhaustion, my pillow tossed on the concrete floor. My dreams were chaotic, nonsensical fragments: the mocking face of my adulterous wife, my little son crying, a green tent, a woman screaming. Elizabeth. Blood. Blood everywhere.

There’s clanging at the door and I try to extract myself from the grey blanket that is tangled tightly around me. I sit up to see Kerr delivering my usual breakfast, as if today is a day no different from any other.

I gulp a cup of scalding tea, dark as bullock’s piss and half-heartedly swallow some of the gelatinous corn hominy that passes as porridge. The door opens again, this time revealing the familiar squat shape of Father O’Brien.

Jesus, Mary, Joseph, I can’t handle his papist drivel today of all days, the voice in my head screams.

For once the priest seems to pick up on a fellow countryman’s need for silence and lowers his bulky frame wordlessly onto the end of the narrow cot. We sit in silence, side-by-side, uncomfortably close. The priest kneads wooden rosary beads distractedly between his right thumb and forefinger, whilst gazing upwards towards the window slit, as if searching for divine inspiration. I stare, without seeing, into my tin bowl of corn slop, spoon hangs limp in my hand. I register nothing. Feel nothing.

My mood is broken by the jarring sound of metal scraping on bluestone. Governor Peter Dwyer enters the cell with his usual confident swagger. With waxed moustache and dandified outfit, he looks more suited to a gentlemen’s club in Melbourne town than to these grim surroundings. Dwyer is smiling. A hot rush of hope, floods through my body.

Has he brought good news?

I imagine him saying that it has all been a terrible mistake, I’d been right to plead my innocence all along, that I am spared the noose and am free to go.

‘So this is it, eh, McQueeney? Last chance for you to admit guilt before meeting your maker, what?’

I got a whiff of fresh tobacco and shaving soap as the governor moves closer. Arrogant bastard is enjoying dragging out the drama of the situation. There’s no pardon coming. No last minute reprieve. The priest leans forward and looks expectantly at me. This is my cue to make a clean breast of it. Confess and be absolved in my final hour.

How can I confess? I still don’t understand what really happened, though the image has replayed in my mind a thousand times since. That fateful night I dreamt of my wife and little boy. She was taunting me, mocking me, telling me she was leaving me for a better man. I was angry. I couldn’t let her take my boy away from me. The same dream I have had many nights since the adulterous bitch took my son away. My little boy being brought up by another man.

A deafening shot rang out. I was standing in my stocking feet with a pistol in my hand. Someone was lying on the tent floor. There was blood everywhere. My wife? No, it was Elizabeth, the proprietress of the Green Tent. Kind and gentle, Elizabeth, herself abandoned by an undeserving spouse, as I was. Elizabeth offered me board and lodging, a safe haven, whenever I needed it. How could I have mistaken her for my traitorous wife? I must have been out of my mind.  Elizabeth, Dead! I had to get away.

‘No sir, I’m as innocent of this crime as you and the good priest here. My trial was a farce. I swear on my Mother’s grave that this is a grievous miscarriage of justice,’ I hear myself saying. My pleas of innocence have become part of me. I can’t back down now. I can’t bring Elizabeth back, but I can save myself.

The governor looks bored, as if he’s heard it many times before, which of course he has. God knows I’d made sure that I was a model prisoner in the months I’d been at Geelong Gaol. My name was never written up in Dwyer’s book of misconduct. Tempting though it had been to lash out and let go, I resisted the urge. In past incarcerations I’d been a vocal agitator, but this time I had been careful not to step too far over the line. I’d stuck to the rules, but had never missed an opportunity to plead my innocence. Sometimes I almost convinced myself I didn’t do it. You can’t hang a man for sleepwalking, for God’s sake.

Every day I’d expected my pardon to arrive. There had been three hangings in the prison’s short history, but none in the past two years. Public lust for the death penalty was waning, the newspapers had reported. Civilized Victorian society doesn’t hang people. Besides, the evidence against me was completely circumstantial. Surely Elizabeth’s estranged husband was a much more likely suspect than a travelling wanderer like me. What motive did I have?

I’d been in tight spots before and had always survived them. As a transported convict in Van Diemen’s Land, and more recently on a prison hulk in Corio Bay, I’d been able to use my ingenuity to make the best of a bad situation. Owen McQueeney always walked away, free as a bird. Always. This time would be no different.

A shaft of early morning sunlight streams through the window slit. I can smell the heady eucalyptus leaves and almost taste the salty tang of the nearby sea. A horse clip-clops on the cobbled stones outside the prison walls. The sounds and smells of freedom are so close, so very close.

Kerr and two other guards enter the already crowded cell. Father O’Brien jumps up with a squeak. Governor Dwyer takes a short step back so the guards can reach me. They roughly remove my leg irons with a hammer and chisel using more force than skill. Then they pin my arms back, so I’m still restrained. No risk of me clobbering them and breaking loose.

Suddenly I lunge forward, as my churning stomach expels its breakfast contents in a projectile spray that splatters the priest’s bible and the Governor’s face. Little pale yellow blobs of bile and porridge balance precariously on Dwyer’s shiny, pink skin. One of the guards gives a little nervous cough or is it a suppressed chuckle?

The Governor hastily mops the remnants of my breakfast from his face with a blue silk handkerchief. Whilst it was not a deliberate act, I inwardly congratulate myself on my aim.

I step forward with a feeling of renewed power and dignity. The clock might be ticking away my life, but I am not dead yet. I can keep the bastards on their toes, right up to the end. Owen McQueeney is not going quietly.

They push me out of the cell door, towards the gaol gates and beyond, to the empty paddock that hosts the makeshift gallows that they have built especially for me. I shuffle one step at a time, as if still shackled with irons. My legs have forgotten how to walk. My heart is sinking, my courage failing. I have never felt so frightened in my life, but I refuse to let it show. I will deny them my confession. Let them sleep uneasily in their beds tonight with my pleas of innocence ringing in their ears.

I curse them all to Hell.

In October 1858 forty-five year-old Irishman, Owen McQueeney, was sentenced to hang for the brutal murder of Mrs. Elizabeth Lowe, a twenty-seven year-old, Meredith goldfields general store and sly grog proprietress. Mrs. Lowe was shot through the eye while nursing her baby son on 10th July 1858. McQueeney, an itinerant traveller, was arrested and charged with her murder several days’ later, having had some of the victim’s possessions upon him.

McQueeney never wavered from protesting his innocence and was optimistic that he would not be executed.

He was hanged at Gallows Flat just outside Geelong Gaol at 8am on 20 October 1858. 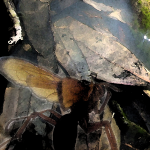 Next Story:
The Call of the Stars