Had as Leif Control

With reference to my Dispatch of the 22nd of July, 1824, to take measures for the reoccupation of Norfolk Island, to which place the worst description of Convicts might be sent. I transmit to you the copy of a letter by Major Morriset of the 48th Regt., whose experience in the management of Convicts points him out as a very fit person for the position. I strongly recommend the appointment of Major Morriset as Commandant to Norfolk Island, with such reasonable Salary as you may consider proper.

Emily has decided she will walk today to the other side of the bay and back. It is a pleasant enough morning and there can be no harm, surely? After all, James has merely told her not to ride. She suspects he plans to take the horse himself, reduced as they are now, to one.

She shudders to think of the poor horses lost at sea, when the storm broke. The ship’s hatches were battened down, but the horses were hurled against their stalls in the hold, bashed and injured, some killed, their bodies thrown overboard to feed the sharks.

It is such a pity not to be out riding, when the weather promises to be pleasant, after days of rain. She was so looking forward to it. Riding has now become her particular pleasure; there is little else for her to do. She loves the feeling of being raised, the breeze in her face, as she makes her way down Military Row to the water’s edge. There to sit motionless in the saddle, gazing out, hoping for the sight of a sail on the far horizon.

It means she must pass the gaol, with its long uneven walls of stone, broken only by the archway serving as gallows. She cannot help but shudder whenever she passes. James has said there are thirteen steps to the gibbet and she wonders, do the sad wretches, that climb them, ever count?

It is now mid-morning and still cold on the veranda. Trees overhang the house, like a cloak, blocking out the morning sun, keeping it dark, enclosed. Secretive. By afternoon, it will creep up towards the eaves, spilling over the sills to the rooms beyond. Then, as dusk falls, the fires will be lit, dispelling the threat of shadows once more.

The servant, Turner, has cleaned and blackened the grates, stripped and made the bed. The doctor and some of the officers are expected to dine with them this evening. Emily has already given orders for more bread to be baked and the pork to be soaked. There is not much to work with and though she tries to work miracles with a little sage and parsley, she wonders if James ever notices her efforts.

Now, she opens her workbox and threads her needle, takes out her embroidery frame, only to lay it in her lap with a sigh. She has grown so weary of sewing; something that once gave so much pleasure. Now she merely aches for someone to talk to, other than a man. Someone to share her secrets, the little things—another woman.

Those last letters she had from home, she has read many times over, folding and creasing the paper so often, it has started to tear. She has deduced every shadow of meaning from the lines, the words unsaid, pictures conveyed, in the hope of seeking the truths lying behind.

Her sister’s child is sickly pale still, and she wonders: will it survive the damp of another Yorkshire winter? Her brother, in London, has acquired new friends that sound too wild and racy, by far, and what of his drinking? His gaming debts? She knows him only too well and worries for him. As for her parents, no longer young, how do they fare? The letters barely hint at such matters.

Emily sits with her embroidery in her lap, staring out at the monotony of blue that skirts the island and feels herself a prisoner. Every bit as much as the beasts locked up at night without benefit of stars above them.

It is still not noon, when she closes her workbox and goes into her bedroom. Taking off her morning gown, she steps into her day dress, pulling it up and buttoning the bodice. She exchanges silk slippers for neat leather boots which she laces tightly.

Opening the door onto the verandah, she runs down the steps and heads for the tiny beach her husband, Major Morriset, has named ‘Emily Bay’ for her. It is only a curve of sand, but if she closes one eye and looks beyond her outstretched arm, she can imagine it fitting within the palm of her hand.

She hears the squish of sand underfoot as she walks, feels it working its way through the eyelets of her boots, rubbing between her toes. She loves this feeling of grit. It makes her feel like a child again, untethered and free to play at will.

High above the island, looming cliffs are topped by a hairline of brooding pines, but here in her bay, the sand is pale, the bushes around her low and scrubby. She feels they offer a sense of peace that sets this place apart.

The sun is now high overhead as she sets out to walk the length of the sand to where the long boats tie up. Today there are no ships riding at anchor inside the reef and no small boats out fishing.

She can hear the waves as they break on the reef, only to crash against the rocks on the foreshore, sending spumes of spray high in the air while up in the hills, the wind sighs wretchedly through the sombre pines.

Emily reaches the end of the beach but makes no attempt to turn back, telling herself there are still hours before Turner will need to start cooking dinner. She can easily be back in time to change.

Then she hears the cry of an animal caught in a trap and is about to part the bushes and step through, when something pulls her back. A group of men, gathered around a prisoner. His arms are manacled above his head, tied to a triangle. Legs apart, he stands, his cries floating back towards her as she stands rigid behind the bushes.

The man’s back is already bloodied as a soldier steps forward and shoves a plug of leather between his teeth.

THWACK – she hears the lash comes down again and the overseer call, ‘TEN!’

The man’s head jerks back, his back arching in spasm.

Between the leaves Emily watches, horrified. Are his eyes closed? She cannot tell.

The stripe snakes thin and red across his back. The convict wielding the lash is broad-shouldered. Chosen for his strength.

A wave of nausea rises from her stomach, but still she cannot move.

This time a stripe, wider, opens the flesh, allowing the blood to flow freely.

At fifty, the doctor steps forward, checks the prisoner, calls, ‘Water!’ and a leather pail of seawater is thrown over the felon’s back.

He writhes, shudders, twisting and clenching his fists above his head. Already two ribs show white through the flesh, the vertebrae sharp-etched, like hills on a map.

‘Continue!’ orders the captain of the guard.

‘FIFTY-ONE!’ the overseer resumes the count.

High above, the wind in the pines builds to a fury.

The doctor takes a step back to keep his shoes from being spattered and stares in dismay at his once white breeches.

The ground all around them is dark and sodden.

Small bits of flesh lie scattered over the area. Shrubs hold forth tiny morsels, delicate as pink blossoms, suspended momentarily on twigs. Emily is mesmerised. She reaches out as if to touch one, only to turn away in revulsion. Again, she tries to summon the strength to run but cannot.

She dares not move, knowing she must wait till the end, for fear of being discovered.

The doctor removes his hip flask, takes a quick nip of brandy; to sustain himself.

‘ONE HUNDRED AND FIFTY!’

‘Enough!’ He steps forward and calls a halt to the punishment.

Emily does not need to look to know that the prisoner has slumped unconscious, that only his arms to support him still.

‘Release this man,’ orders the doctor. ‘Put him in solitary.’

‘Will he be fit enough to work in the lime kiln, tomorrow?’ asks the captain of the guard. ‘I need men in the salt tower, as well?’

‘Who knows? He’ll not thank you for either,’ observes the doctor. ‘But I will give my opinion tomorrow, should he last.’

Clouds now shunt their great grey shadows across the shore line, as the man is released and carried by his fellows back to the penitentiary. Emily, suddenly freed from the sight, climbs back down onto the beach and starts to run for the house.

That evening, she dresses plainly in her dark red velvet dress. She lifts her pearls and is about to place them round her neck when she thinks of the translucent balls of skin she saw today on the bushes and hastily puts the pearls away. James has given them to her, but should he ask, she will say she forgot to wear them.

As they sit at dinner, she sees a frown ruffle his brows as if he is less than pleased with the meal before him, and yet it has been months since a ship brought them fresh supplies. Surely he realises she has done her best?

Emily has placed herself between the doctor and the captain of the guard, but though it is her duty to speak of matters that will raise the level of conversation to something more cultured and civilised, tonight she seems more than usually quiet. She listens to the men speak of the brutes in their care. How difficult is the task of keeping them in order. The nature of control, how it should always serve the common good—and does.

She eats listlessly, pushing the food around her plate, showing little appetite.

‘Are you all right, my dear?’ James appears solicitous in front of his guests.

‘We had a flogging today, Emily. A most depraved wretch. Barely human.’ He reaches for the decanter. ‘Port, doctor? Captain?’

‘Thank you. Yes,’ the doctor says, helping himself and passing it on. ‘I doubt he will give you too much trouble now.’

‘Good.’ The captain replaces the stopper, holds his glass to the candlelight, then says, ‘I need more convicts for the lime kiln.’

‘You shall have them,’ says James.

‘They may come with scarred backs,’ warns the doctor.

‘No matter,’ replies the captain.

Emily looks from one to the other. All three of these gentlemen treat her with the utmost respect and courtesy. Yet tonight, it is as if she is seeing them for the first time. Strangers.

James reaches across and places a hand over her delicate wrist. He smiles with some concern, ‘That is why I would not have you ride out today.’ 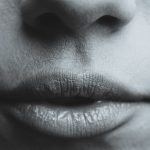 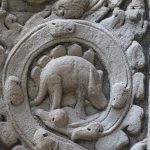 Next Story:
Dinosaurs: An Alternate Ending