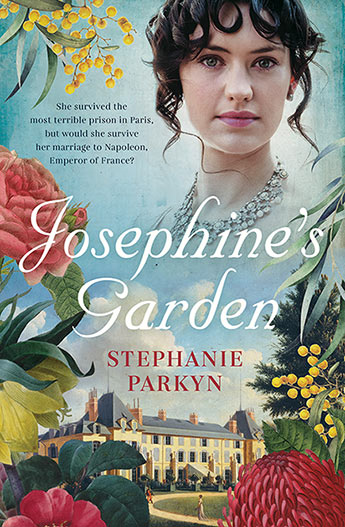 “‘I have the order here. With a scratch of my pen his life is over.’

Josephine gasped. ‘Execution without a trial!’ Her words hung in the dark room. Had he forgotten those awful days, the days of the Terror? Had he forgotten that she too had once faced the guillotine without trial? She feared what her husband was becoming […] ‘Think of what you are doing. This is murder!’

Her words rang into silence.”

Josephine’s Garden is Australian and New Zealand author Stephanie Parkyn’s second historical fiction novel. Set in France between 1794 and 1810, the story introduces Rose de Beauharnais. Rose transforms into the beautiful and breathtakingly flawed yet captivatingly amiable Empress Josephine Bonaparte. We learn of her beloved home, ‘Malmaison’ and its rambling botanic gardens, exotic and unconventional, just like the empress who so painstakingly brought splendour to the once neglected estate.

Josephine’s extraordinary life is interwoven throughout times of revolution, executions and dangerous politics. If you were a woman, you had better be a strong one. In fact, Parkyn has presented an impressively woven narrative that seamlessly links and crosses over with the stories of the other central characters of the novel. We read of the botanist Félix Lahaie and his wife Anne, and the naturalist Jacques Labillardière and is lonely wife Marthe. Their stories weave a rich narrative of families, careers, social networks and egos along with loveless marriages, adultery, extravagant indulgences and crippling loneliness. Josephine is imperfect, flawed, reckless and selfish, yet, I found myself in sympathy with her struggles. I was relieved to realise it is okay to like her and I wondered if she is, after all, just a product of her time, of the debauched bourgeoisie, of the threat of poverty and the ever presence of death, and the trauma of her months of imprisonment during the Revolution.

My favourite thing about Josephine’s Garden is its constant link to Australia. Josephine and her fascination with the flora and fauna of the ‘newly discovered’ continent Terra Australis was a recurring theme. It must have been exciting and difficult to resist the temptation of showing off such curiosities and to be the first to possess such exotic specimens in France. Germinating bluegum seeds and wattles was forgivable, but it was confronting to picture the displacement and captivity of our beloved wallabies and emus for the sake of vanity and status. The author successfully highlights the backward ways of such a time of so-called enlightened ‘scientific inquiry’.
Throughout the book, there is a subtle and satisfying crossover with Parkyn’s first novel, Into the World, and if you have read it, you will adore the little easter eggs and the allusion of more wonderful things to come in future works! But most of all, I feel these characters in my bones:

“Marthe and Jacques Labilladière arrived mid-week. As soon as they entered her parlour, Anne began to feel uneasy. They were both so tall and upright in their manner, they made her feel fat and frumpy and every bit the farming stock she had come from.” 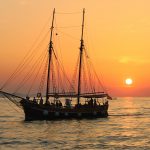 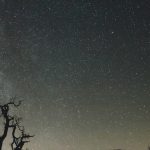 Next Story:
The Min Min