Aesop the Fox is Suniti Namjoshi’s first novel in six years, and those familiar with her fiction works will be glad to see the return of her typically playful and inventive prose.  She casts Aesop in the roles of melancholy slave and clever story-teller. Reflecting the eponymous character, it is a book of two halves.

In the first, the narrator is ripped mid-way through life from the twenty-first century into the Ancient Greek world of Aesop. At first, the story skips along whimsically from vignette to charming vignette. Aesop, the narrator and the characters share quips and tales, as they mull over the stories’ meanings and integrate them into the everyday, slowing every so often to satisfy childish queries. ‘Why don’t we just go fast and steady on that horse and cart, Aesop?’ The stories’ meanings change as interpretations are shuffled between characters. Indeed, the moral of the story is often cheekily inverted.

The second half turns toward the meta. A child asks, ‘Do all stories mean something’?[1] The famous slave’s reply smacks of Derrida (albeit Derrida on a lucid day) ‘each time a story is told it means something different’.[2] ‘And each time it’s heard’, interjects the narrator.[3] The moment swiftly passes, yet this simple assertion, pitched to curious children, throws up a much larger concern of the book: whether the seemingly timeless wisdom of Aesop’s fables is drawn from the simplicity of ancient life, stripped back to a deeper truth, or if such wisdom is fashioned and reimagined, contingent on the moment of its retelling.

Indeed, midway through the story, the narrator asks Aesop, ‘What do I want from you?’ And what could our narrator – a time-travelling, self-proclaimed feminist – possibly have to learn from a disenfranchised bard who predated the very question of gender equality?  The value is clearly in the fact of the dialogue. And, more importantly, it is in the joy of story-telling.

Yet, as the book winds towards a close, the fables begin to dry up, and the narrator gives the impression that she is losing control of her story. Grappling with the contours of history, what’s plausible and what seems true, she fears for Aesop’s life as he approaches his historical end at Delphi; and she questions the possibilities of authorial power.

Throughout the novel, the reader experiences Aesop’s stories in their imagined, classical context, and a strange disquiet seeps in. It is the emergent insanity of teaching one’s children morality through these cautionary tales, produced in the misogynistic and slave-ridden world of Ancient Greece. Aesop and his fellow slave Androcles are beaten bloody on the slightest impingement and betrayed without justification by their master Xanthus. Of the women silence is expected; even the noble woman Aglaia has a fettered voice that she must deploy only with care.

After being sold to a kinder master, Aesop has an understated love affair with his master’s wife. Aside from the obvious and irresistible temptation to make this figure – synonymous with morality – an adulterer, this sub-plot serves no discernible purpose. It feels a little like it has been shoe-horned into the novel, to compensate for the uncertain relationships between the characters – relationships that remain somewhat unsatisfactory, and almost peripheral, throughout.

But such short-comings are ultimately beside the point. The first half of the book will appeal to all. Lucid and engaging, it sweeps the reader along in wonderful fits and starts. While the second half loses its momentum, it is chock-a-block full of insight for writers and creators in particular. And the author has conducted sufficient historical research that only the most austere of classicists will fail to appreciate this novel.

At its best, it is a light-hearted jaunt into an uncertain past. At its most profound it is a dialogue with that past on the nature of morality and its bleak potential to shape our own uncertain future. 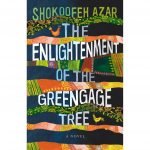 Previous Story:
Book review: The Enlightenment of the Greengage Tree, by...

Next Story:
Extract from The Lace Weaver